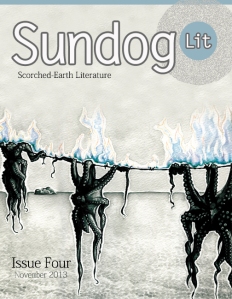 A Slick Six From Camouflage Country

On Monday the cat pissed in the plant. I put the plant outside. On Tuesday the cat pissed on the bathmat. I put the bathmat in the trash. On Wednesday the cat pissed in its litter box and things went according to plan. On Thursday the cat pissed in the house. I put the cat outside. Friday I couldn’t find the cat. Saturday I still couldn’t find the cat. This lasted for many months. Then one night I got real drunk and stayed that way for weeks. I felt so bad about the cat. When I sobered up I managed to lock myself out. I put my foot through some glass and broke in. There was the cat asleep on the bed. I woke him up and said: “Fancy seeing you here. I’ve been looking for you everywhere and here you are. Now let’s get something straight. We’re going to need to set some ground rules. I’m going to show you something important. I’m going to show you how it’s done.” Then I went over to his litter box and pissed in it and wept.

We missed our freeway exit and ended up at a defunct hospital. From the backseat came a cluster of cocksuckers and motherfuckers. Then we missed the on-ramp and had to turn around at an abandoned airport. In the rearview, I glared at the twins glaring at me and mouthed, “Bring it, sons!” You searched your purse for breath mints but returned with sleeping pills. “Cheers,” you said. “Wake me up in Arizona.” The twins said, “I want one! I want one!” And you gave them two each. Soon enough the backseat was snoring. I cracked the window and lit a joint. I thought about driving straight through to the Grand Canyon. Then I thought about driving straight into the Grand Canyon. Then I rolled up the window and thought better of it. It was too dark outside to think dark thoughts, too. When we crossed the state line I whispered, “Arizona.” Then your head was in my lap and my lap was in your mouth. My hands relaxed on the wheel and my eyes relaxed on the road, the road. The road kept coming.

By midday our tiny home had filled with tradesmen. I jockeyed for room to make us peanut butter sandwiches. It wasn’t easy. Still, we tried to take it easy, knowing that nothing worth doing was ever stress-free. All afternoon, we sat there freeing our stresses as best as we could, chasing pretzels with Schlitz as the walls tumbled around us. After sunset, when the men finally knocked off for the day, they’d already knocked down the partitions and installed two pine lanes and a ball return. And before the foreman left, he said, “We’ll be back to mount the pinsetter machine in the morning. After that: the projectors. You’ll be in business by the end of the week.” I said, “Good, because the wife and I can’t wait to start working from home.”

She sat on the porch and introduced herself as Marcy. I said, “Marcy?” She said, “No, Mercy.” I said, “Mercy?” She said, “No, Merci. M, E, R, C, I.” Even sitting down you could tell she was tall. She wore an old bathrobe over a sequined dress. I took a drag from my cigarette and said, “That’s an interesting name. Is it French?” She said, “Silence. I’m here to help you help yourself you fool.” Then a rainbow beam blasted from her forehead and turned my cigarette into a bird. The bird shit on my shirt and flew off into the night. I was scared. She stood and said, “Fear is the opposite of the truth. Be honest.” She was tall, taller than a small forward. She opened her robe and revealed four caped dwarves praying on their knees. She said, “Never mind them. Look at me. Eyes up here. Listen: You will stop gambling on horseracing and high school basketball games. You will start saving. You will stop smoking. You will start jogging. You will stop drinking. You will start juicing. You will quit your day job. You will teach yourself to code. You will invent an app that projects a hologram of me and gives advice. You will call it APParition. You will make millions. You will donate half to charities of your choice. After a gala event, you will impregnate an equine veterinarian. You will move to Tucson and together you will raise a child prodigy and care for hundreds of horses.” I said, “But I hate horses.” She said, “You will learn to love them and they will bring you unbridled joy.” I said okay and suddenly I felt okay. She said, “Yes, from now on you will never feel the same about your feelings again.” And then I didn’t, but then I did.

They took my keys. I took their money. I slipped across the border where cartel wars raged. I chose a side. I joined the fight. I took many scalps. We all won. We all lost. We all learned something we’d forget then remember again. You once told me you can’t stomach children. I still can’t believe in dogs that come home.

Elvis Costello Has Left the Building

The opening band closed. We set our hair on fire.

MEL BOSWORTH is the author of the novel FREIGHT. He lives and works in western Massachusetts. Find more at melbosworth.com.

RYAN RIDGE is the author of the story collection Hunters & Gamblers, the poetry collection Ox, as well as the chapbooks Hey, it’s America and 22nd Century Man. Managing editor at Juked, he lives in Southern California. Read more from / about him at www.ryanridge.com.