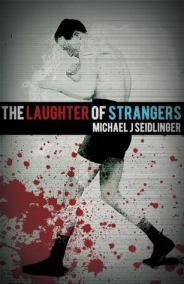 [i. INDUCTION/INTRODUCTION]
The threat of physical violence had begun for me long before I understood it intrinsically as a threat. It played itself out around me throughout the neighborhoods in which I grew up. It became a game of semantics in the houses where I ate, played, slept. It spoke like language, governed senses like fog, like religion. It wasn’t until the third grade that I would collide with the inevitable truth. That physical violence leaves a stain—one that doesn’t always shake out with the dust.

Third grade was a year of upheaval and unrest, already an eight-year-old veteran of domestic strife. New father, new siblings, new home, new rules. A fresh outsider, I was—an other at a brand new school. I’d become an instant older brother in the third grade. One whose name a younger brother would wield like a weapon in the face of all that might further trouble the chaos of a boy’s day. It wasn’t uncommon.

It felt good, this having a brother, this having something good to protect. Most of these battles unfolded like any other playground skirmish. A bit of chest to chest, some light pushing and throwing, a dash of bad karate-flick mimicry for flavor. Often, they would end in the dragging of faces, knees, arms, legs, or elbows across hot, grayed blacktop, surrounded by a jeering miniature mob—the beginning threads of blood leading from various bits, intermingling until some teacher or terrified parent intervened. The agreed upon story was always about the same.

The crowd would disperse to the standard hollow mumblings; the chest-thumping under the breath; the “I’m gonna fuck you up tomorrow after school, watch” talk. But all walked away—and for the most part, unscathed—eager to get back to the business of being children with few more pressing concerns.

I took notice of Randall for the first time over an incident at recess: a push from behind, and on the other end of the shove was Randall, all red-faced and huffing, spitting and dead-stare angry—at what or whom exactly, I will never have come to know.

Randall carried himself in that moment like an apocalyptic vision of a tiger, sick with war and walking upright on two sharpened sticks. Randall was a boy determined toward destruction, whose voice I cannot recall ever having uttered a word. He would sway, push and swing, throwing handfuls of gravel and dirt—anything on which he could lay feverish hands. The crowd began to gather; the bell had other designs.

By the end of the day, I’d forgotten about Randall. We two brothers carried ourselves from the building, making plans, stepping out onto the blacktop, and then finally onto the sidewalk, eager to head toward home. It wasn’t until a half block later that a familiar shove from behind would bring Randall back to the fore of my thoughts.

what the fuck
is your problem, man?

answered only
by heaving
shoulders again;

the rise and fall
of his tattered-sounding
breath,

With the second shove, I began to taste real fear, fear in regard to the unknown; that this battle had no precedence in my world. It wasn’t a challenge so much as an explicit mortal threat. One which would renew itself each time we turned to leave.

I met his third shove with a half-hearted nudge of my own. A limp gesture, born of frustration, answered once more only by shoulders heaving, by the blush of circulation and the clenching of tightly drawn fists.

As the fourth beat at my base of my neck, I’d finally had enough.

And in a blind final burst of frustration, I spun myself to connect dense, balled tissue to the first thing it would reach at roughly a shoulder’s level. Randall had lurched forward again, meeting me half way with his throat. It felt as though I’d moved right through him; as though I’d landed a punch into an empty cotton shirt, or something like a sharp kick shot into a loosely gathered mound of sand. Randall dropped to the sidewalk and laid there in the fetal position. Quivering and shaking, he was, grasping at his throat, lungs all gasping for air.

This too was unprecedented in my world, so much so that my only instinct was to run and run we did, my brother and I—all the way home and into the safety of our rooms, hearts leaping from our chests, and not another word did we speak of Randall that day.

I thought I had
no idea
what I should think.

I thought Randall.
He’s one of us—

[iii. IMPLICATION/EXPECTATION]
In the mind of a child, all days are nearly separate lives in time. And so the next morning, we were off to school as though nothing had transpired. Morning schoolyard chatter soon connected the days like explosive dots.

“Did you hear what happened to Randall?”
“They took him away in a amb’lance,” one said.
“Some boys punched Randall in his throat,” said yet another.

Talk spread like a virus, becoming more unnerving, if not completely impossible now in retrospect, with each generation of the tale.

“Someone jumped Randall, I heard.”
“They knocked out his windpipe and bent it and it wouldn’t go back.”
“Is he dead?”
“They stabbed Randall in the throat with a butcher knife.”
“A butcher knife?”
“A BUTCHER knife?
“Who?”
“WHO?”
“Is he dead?”
“Someone left Randall on the street. When they got there, he wasn’t breathing.”
“So he’s DEAD.”
“DEAD dead?”
“Uh-huh. Randall’s dead!”

The rumors only grew more monstrous. Before and after school. At each recess on the playground. For days. The following week had come and gone, and Randall had not returned. We even rode our bikes past the house legend said was his, despite sickly guilt and fear of implication. We would sneak and slink around his block, but Randall was nowhere. Randall was only a boy. Randall could not be found.

Every new school day brought with it a new expectation of authority. We began to believe the stories no matter how inane. After several weeks of no Randall, a friend said that his cousin had seen him recently at school. Not this one, but another, on the other side of town. He said that Randall had just started there—that he’d already gotten into a fight with a friend of his cousin’s friend.

I still don’t know for certain what happened to Randall, or what it was that influenced Randall to act in the way that he did. In the time between the incident and the sighting, I thought of him often. I wondered what Randall did when he wasn’t in school, how his mother was probably frightened and angry. I wanted to apologize to her and to Randall, and I wanted to believe that maybe Randall would be sorry too. Mostly, I think I wanted this all to mean something more than it seemed like it did at the time.

I wondered so many things I couldn’t begin to articulate, but I would have to be satisfied with the fact that Randall still existed—my third grade world now heavier with the lesson that not all we encounter in this life is as simple as it seems on TV.
—
David Tomaloff is a very important something. His work has appeared in several chapbooks, anthologies, and in fine publications such as Connotation Press, Metazen, Heavy Feather Review, The Northville Review, CBS Chicago, Necessary Fiction, HTML Giant, A-Minor, Pank, and elimae. He is also co-author of the collaborative poetry collection YOU ARE JAGUAR, with Ryan W. Bradley (Artistically Declined Press, 2012). Send him threats: davidtomaloff.com.