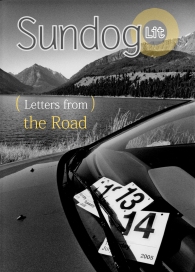 At seven thousand feet on the south slope of Mount Shasta it’s May in August: paintbrush, purple and sunshine daisies, lupine, bride’s lace, and grass so green it looks like a doctored photo. Near the bubbling spring, headwaters of the Sacramento, a woman sits cross legged, eyes closed, palms upturned on her knees, unfazed by chattering hikers. The meditator wears a serene smile, listening to some hum only inwardly perceptible. Sometimes I despair of hearing things purely. Sometimes I despair of there being a pure something to hear. Who knows what’s really going on here? Does the fact that meaning is just something we invent and name meaningful render it all ultimately meaningless? Can the earth’s beauty be meaning enough?

The past collects behind a locked door and windows I can barely see through—water spotted, dust streaked, like the desert parchment this covered wagon must have jounced across for weeks to get here. Burning with the slap of bare seat planks, a man and woman rattle forward into this frame where, mining mud from the river bank, they built the small adobe overlooking the Sacramento. The evening’s lead light gilds the air like a daguerreotype. Circling the cottage I note how, if I had a camera, the broken pane would offer the best composition: more tragic than the shapes our easy lives are measured by—less assured than the flutter at my wrist the jagged edge defines. I want to reach in, finger the stained chintz curtain, wipe clean a lens fogged by the heart’s breath.

It’s harvest time and four jackrabbits with tall brown ears have claimed the orchard, getting fat on windfalls. Sitting on the deck, I spot two does standing at the back gate gazing in, waiting for a favorite concession to open.  I should bottle pears, tomatoes, applesauce, and make pesto of the sprawling basil, whose blossoms I neglected, going to seed early. Except for a batch of muffins and a morning of solitary grazing, I missed the bumper crop of blackberries.  The jays got more plums than I did and black acorn woodpeckers in crimson beanies and white vests hollowed every almond husk on the trees weeks ago. This morning I spooked (wrong word—those creatures are fearless) three turkey vultures dining on a spring fawn at the roadside, hit by a car in the night.  Creamy spots still dappled its coat.  Consider the lilies of the field, blooms gone.

I’ve heard nothing from you all summer long.

JOANNE ALLRED is the author of three poetry collections: Whetstone, which won the Flume Press Chapbook Competition, Particulate, published by Bear Star Press, and The Evolutionary Purpose of Heartbreak, recently out from Turning Point Press.

My most recent favorite road trip is the road/camping trip through eastern British Columbia and Western Alberta I took this summer–some of the most stunning country I’ve ever seen with its glaciers and waters and stand-up Rocky Mountains.  Looking at such agelessness has a way of putting everything else into a useful perspective.