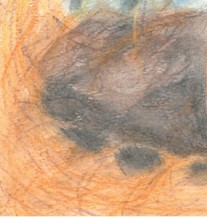 The first time the rabbit and I got a good look at each other in Lilian’s apartment, we both scampered away, scared.
The rabbit had dark gray fur and big blank eyes. Lilian named it Gretchen. Then she took a trip to L.A. When she returned, Gretchen’s balls had dropped.
Unable to hump the way his kind did in the wild, Gretchen slammed his stuffed animals. They’d slide all around the hardwood floors and I caught Lilian holding them in place to “help him out.”
Gretchen used a litterbox, but poops would inadvertently slip out and collect in corners like Cocoa Puffs. When I said it wasn’t so bad because he only ate hay and vegetables, Lilian started bringing him to my place.
Rabbits’ teeth continue to grow and they chew to file them down. Wood, paper, cables … everything but stone, which would do the job quickly.
Gretchen didn’t play fetch or tug o’ war, but I got used to him, even if he gnawed everything on my bottom bookshelves and his eyes reminded me of plastic.
The ex and I had just finished playing one-for-me one-for-you. We’d planned to marry then visit Iceland. I got the cuckoo clock, the telescope and a box of her winter clothes.
When Lilian suggested she and I make the trip together, I bought her a glossy travel book. She once told me she liked to read them while boyfriends attempted to pleasure her.
We flew into Reykjavik around the summer solstice. Glossy fjords and houses painted like Easter. The midnight sun stayed in the sky the way a flag stays on the moon.
We shivered, back to back, dreaming of coffee. I wore one of the ex’s sweaters. Lilian bought a thick scratchy one.
We got postcards of Dieter Roth’s Karnickelköttelkarnickel, a chocolate Easter Bunny–looking rabbit made of rabbit poop.
The earth looked like the moon. The gray side of the highway bubbled and geysers erupted. Geyser comes from the Icelandic verb geysa, which is “to gush.”
Lilian kept grabbing my hand, saying, “Let’s go to Mexico. Let’s go to Paris.” In the evening she said, “Let’s go to bed early.”
“Iceland,” I’d say while I slipped out alone to drink strong beer with kind strangers. And to talk about my ex.
A small cottage by the sea provided a pit stop. It had an oily roll-top desk, an ancient organ that didn’t work and wooden beds built into wooden walls.
I could see the ex at the desk, making sketches of the sea. We would have made a game guessing which song the creaky instrument last played into the quietude.
Lilian didn’t like isolation. She liked cities that encouraged minimalism and preferred metal to wood. Maybe because of the rabbit.
As soon as we landed in Chicago, Lilian and I stripped off a layer of clothing. Then we went to fetch Gretchen at the exotic animals place in a small strip mall with a liquor store and a taquería.
The animal ads were the best. “Before being boarded, bearded dragons are tested for adenovirus, also known as star-gazing disease.” It sounded like a better way for a dragon to die.
Lilian was planning, gazing forward. Thai on Tuesday, films on Sunday. Sex on Thursday? For Valentine’s Day she bought me an electric toothbrush.
The last night I spent with her, Lilian welcomed smells of hyacinths through open windows. She made popcorn over the stove. While white kernels popped in yellow oil, I watched Gretchen hump his surrogates.
I didn’t know how to tell Lilian the ex had contacted me. Wanted to visit. Lilian turned off the lights and started a movie. I placed rabbit ears among the other shadows on the wall.

Marcy Rae Henry is a Latina born and raised in Mexican-America/The Borderlands. She has lived in Europe and Asia, floated down the Nile on a felucca and traveled through the Middle East on a motorcycle. Her writing and visual art appear or are forthcoming in The Columbia Review, Epiphany, Hobart, Thimble, The Southern Review and BathHouse, among others. Her writing has been longlisted, shortlisted, honorably mentioned and nominated for the Pushcart Prize. She has received a Chicago Community Arts Assistance Grant and an Illinois Arts Council Fellowship. DoubleCross Press will publish her first chapbook of poems.