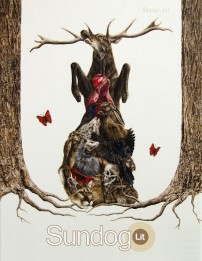 Too soon again the earth appears
respectable, receives the sun with
neighborly aplomb.

Boundaries return. The snow
erases borders, emulsifies lines.
Uncovers artifacts: the sweet black
belt, your Swiss piano, our first
Communion. There’s much to be
found in the remaining brackish
streets, in the damp still clinging to
the downy cheeks of youth, running
in geezers’ wrinkles. Black cows
speckle the hillside, negatives of
snow.

We remember dark, the cold,
terrifically violent with sound,
motility. The murmur of hands at
benediction. Bluebeard the butcher,
ever the pragmatist, and the circus he
erected in the abattoir. Its windows
cloud with milk as easily as with
blood.

What hearts, black as Sunday
best, small as needles, are even now
stolen away to the atmosphere, to the
aquifers? What becomes of the river,
in that place it meets the sea: what
feasts are surely eaten at such a
meal?

Polar night—slam the door
on spring’s face. Make again the
sounds, the bell toll of hungry
children, the crack of weather vanes.

How boring: all the things I
love—heat, light, stillness—are
returned.

M.D. Myers writes poetry and watches old movies in Fayetteville, Arkansas while pursing an MFA and co-curating the Open Mouth Reading Series. Her poems have previously appeared in The Apalachee Review. During the summer of 2015, she received a scholarship to attend the Squaw Valley Community of Writers Workshop.