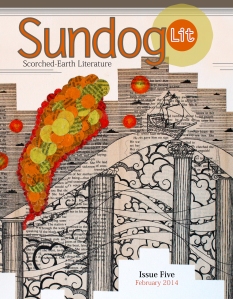 I Don’t Play That

It’s still hot and gone-love that kept me here, dirty-
pool love in places where hearts get stored in mason jars, one
more vacuous day in Tulsa in some early autumn, a surprise
scrambled egg breakfast once a ritual when the man was cute
and the grass was emerald not beige and the bank
of windows in the New York City apartment let in
air that tranquilized the part of him that was toothwort
and probably part of him that was game and I knew that but didn’t
know he was also part of the broomrape family of plant
life. But that was when I was dog gawn. Long gone. Eggs
that day too and Texas Toast scrambled
my receivers. How was I to know that this day with its mustard sun binding
through broken cheap blinds, that a playful gotcha-punch in his belly
after his gotcha-grab of my rear would turn him into a whizz of a cartoon
so that I couldn’t see the age-spotted hands and filthy nails thick around
my neck and I think I wheezed like a mourning warbler but who knows? This total lack of repose and that sun hurls scabrous hands to hauteur.
It’s not the same as the other time in New York when I really did see a film
of my life being directed by a mother who laughed at the psychologist
who told her plainly: There is nothing wrong with your daughter that your love
couldn’t cure. Love? she said? I don’t play that and had I kept that
in mind and stopped dancing your pokelogan prescript
of how I have to be thankful for my portion in life
The theatre of the absurd brought down
its curtain this time. I lay quite still and that threw him.
I wondered what was going to happen as if I were watching
a new film I just wasn’t that interested in. I made the death inside
of me rise on the tail of that filmy mother and I thought I spit
on him but his wrinkled face, way more wrinkled than mine,
was clean. Outside the sound of messy, methy neighbors slamming
doors over and over, then a movie-voice like the chopping of onions.
I spliced the film together with a final cut. He doesn’t know. He lights
a Newport and reaches over me to get me my Maverick, gives it to me
in the mouth, lights it as if he’s given me a diamond, and I cut
the film further, recast him with someone cuter, someone who is not a plant.
I sing the Shema in my head and see yellow dahlias and orchids and he goes
the way of the unclean. Misty, a photo, a still. You could lose the manic
mustard sun in that kind of day. Nature doesn’t matter when a man’s nature
is a bare festering sore on a dragon, so why should I give one more thought
to orchids which are hoped-for testicles? Let Bacchanalians tear him apart
to baffle the arroyo, because he’ll never have my heart—Oh!
HaShem unlike the Greek gods, would not turn him into a flower. And though
I may walk through the valley of death, I shall fear
no evil. I’m feeling better that I can hold a little pugilism. Spirit soars,
and copes by Tehillim and to be as a tree and bring forth fruit,
never out on a limb with the him who choked words out of me.

NANETTE RAYMAN is the first winner of the Glass Woman Prize for writing. She has two poetry books published: Shana Linda, Pretty Pretty and Project: Butterflies from Foothills Publishing. Nominated for two Pushcart Prizes, she has published in The Worcester Review, The Berkeley Fiction Review, gargoyle, Pedestal, magnolia, Oranges & Sardines, up the staircase featured writer, Arsenic Lobster, Red Ochre Literature, Stirring’s Steamiest Six, carte blanche, Wilderness House Literary Review, deComp, grasslilmb, Arsenic Lobster, Prick of the Spindle, Carousel and Sugar House Review where her poem, One Potato, Two, was mentioned in Newpages.com. A story was included in DZANC Books Best of the Web 2010 and a poem, “Shoes” was included in Best of the Net Anthology 2007. A portion of a one act play she wrote was performed for her in Israel in 2013. She attended Circle in the Square Theatre School and the New School. She has performed in many off off Broadway shows.