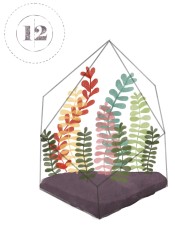 My Father Imagines Winning the Lotto

The over-ripened plums fall all around
that grey chapped trunk, purple & half-sunk
into the earth it has landed on. & my father
can’t keep up with picking the gently plumping
fruit & dream about hitting a jackpot
at the same time. Even now, he glides
through the yard, so green, & stepping up
to a dwarfed avocado tree sinks the hose
into the dirt, & says, If I win the lotto,
I’d buy a big house in Mexico, you know,
those ones right on the beach there,
& oh man, I’d probably never leave.
If you can see my father now,
his smile is wide & deep & full
of teeth, yellow & big as unknowing,
& I imagine a new kind of galaxy
forms each time my father imagines
imagining a vacation, an untouchable
cosmology even I am afraid to say exists.
But he has bought lotto tickets on his way
home from his job teaching junior high
Algebra for thirty-eight years, spending
one dollar a day against the sum of worrying
about mortgage payments, shattered windshields,
& domestic catastrophes like pregnant daughters.
Sixty-three & he’s never been outside the state.
Still, he watches the weather channel daily
so he can speak about the world.
It’s something not meant for us, I think,
that life where Americans go to Disneyland
or eat funnel cakes on the pier at dusk, or play with
dolphins named Tiki or Lulu, or start a fire
on a beach for songs & hot dogs. I watch
my father sail away to a place he imagines
in evenings, where even though his feet
are planted in viney Bermuda grass, tightly
holding onto a water hose that sprays out
to the greening yard, he has struck it rich,
his numbers for once, making that
fortunate sense. & tomorrow
he waters his fruit trees. He picks
his tomatoes, before he falls
asleep inside on the couch.

Sara Borjas is a 3rd generation Chicana and a Fresno poet. She digs space & time, memory, aromatics, tiny prints and oldiez. She is the recipient of the 2015 Blue Mesa Poetry Prize and is a Community of Writers at Squaw Valley Workshop Fellow and a 2017 CantoMundo Fellow. Her most recent poetry can be found in Queen Mob’s Tea House, Calamity, Askew, The Acentos Review, and Luna Luna. She currently lectures in the Creative Writing Department at UC Riverside. Find her at saraborjas.com.