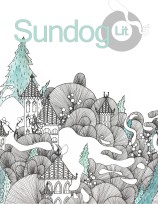 Mary-Kate Olsen really knows
how to throw down.
Reportedly there were bowls
and bowls and bowls of cigarettes.
No phones allowed.
Just a garden and fifty people in it,
all dressed up and gone already
to where they were going.
Whiskey and white lights are all around.
Nothing says “I’m ready for forever”
quite like the smoky swirls that linger
after a cigarette is extinguished.
I too love the way I can feel the heat
in my mouth when I inhale deeply.
I agree with the bride, the sound of a Bic flicking
is beautiful, just like chapel bells and roses.

even on weekends, making fried mushrooms
just another impossibility. I drink

hot tea and imagine where everyone goes
on Saturday nights. Most restaurants are

closed by now. The bars are half full
and the streets are mostly empty.

Yesterday I pretended for a moment
that I was somewhere else

as I sat in a beautiful basement bar
that recently opened downtown.

and New Orleans, but the music was missing.
As was the charm of being worn in,

and no one was smoking, even though
this city was built on tobacco money,

people have learned it can kill them,
but not me, I like to keep a habit forever.

After the bar I walked around
and found a free show in an old building.

and I left, noticing on the way out
the new sign that said Culture Mill,

as if culture were a thing
to be ground up and sold.

Kelly Jones has an MFA in Poetry from the University of New Orleans and a BA in Literature & Social Justice from Antioch Seattle. She just moved to Greensboro, NC to go back to school and become a librarian. In addition to books, she also really likes glitter, manatees, and whiskey. Lately she tends to spend her free time drinking too much coffee, walking her dog, and DJing for the local college station.